An overview of the other markets of the day shows:

Today’s big event was the virtual event with Fed President Jerome Powell. In the event that Powell has warned that there is more danger coming from the coronavirus. He added that “recovery can take time to gain momentum, and the passage of time can turn liquidity problems into solvency problems”.

He also passed the baton to Congress saying:

Additional budget support could be costly, but it is worth it if it avoids long-term economic damage and leaves us with a stronger recovery. This compromise is one for our elected officials, who have powers of taxation and spending.

That said, Fed Powell is not going to sit idly by. He did everything necessary within the framework of the Fed’s mandate. However, this mandate may be limited. He also indicated that moving rates to negative territory was not being considered, although he did not stop declaring it completely negative.

Powell’s comments (and the drop in producer prices) did not go well with the stock market. The main indices fell, the Dow’s industrial average being the worst. The latest figures show:

European indices also ended the session down, the French ACC leading the climate to -2.85%.

In the US debt market, yields were also generally lower and the yield curve flattened. The 2-year yield recorded a slight gain of 0.2 basis points. The 30-year bond fell -2.7 basis points to 1,343%, but was at its lowest level at 1,315% after a botched 30-year auction.

On the foreign exchange market, the NZD was the weakest currency on the run (and the biggest driver) as it continued its negative reaction after the RBNZ almost doubled QE to NZ $ 60 billion. The NZDUSD pair fell below the level of 0.6000 to a low of 0.5979. There is trend line support on the hourly chart and a swing bottom since April 24 at 0.5975. Descend below and the downward trend continues. A move above 0.6000-0.6010 could see short coverage in the new day.

The JPY and the USD were the strongest of the major currencies.

Some technical comments before the new day: 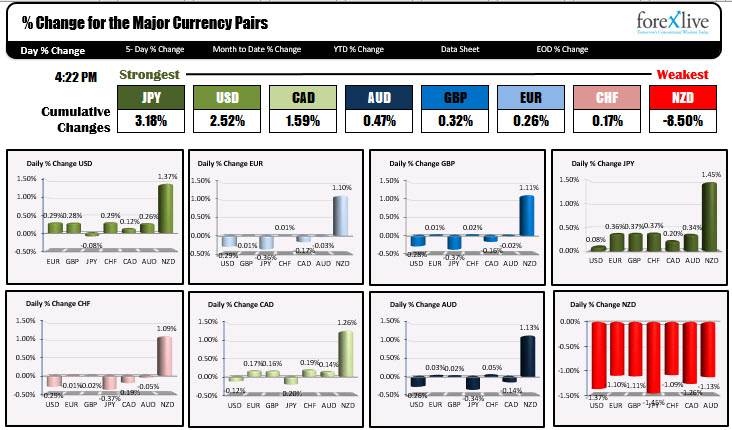